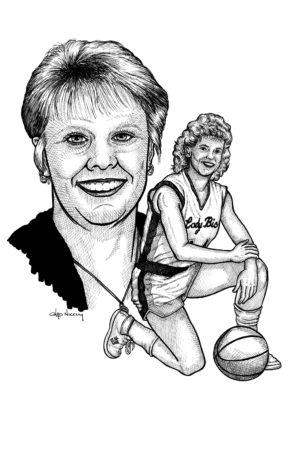 Winner of the 1988 IHSAA Mental Attitude Award for girls basketball… Scored 1,000 career points and set school records with 350 career assists, 177 steals and a single-season record with 133 assists… team co-captain for three seasons, her teams were 86-11 and won three sectionals, two regionals and one semi-state… averaged 18.6 points, 5.5 assists and 4 rebounds as the only senior on Benton Central’s 1988 state finalist team…  was named 1988 Mini Miss Basketball by Hoosier Basketball Magazine, USA Today honorable mention All-American, a member of the 1988 AAU National Champion Lady Hoosierettes and was valedictorian of her graduating class…  a three-year starter and tri-captain at University of Indianapolis, she fought through both knees being reconstructed and six total surgeries… named the 1992 school Female Student-Athlete of the Year, was a part of their 1993 conference champions that finished 24-3 and nationally ranked, named Mental Attitude Award winner and Academic All-American… longtime teacher at Benton Central, serving as the school’s head girls basketball coach from 1997-2001, with a record of 71-48.