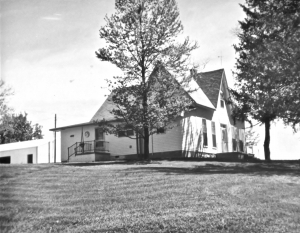 Gene brought an article with him that was written by Jeff Wolfe in March of 1991 and published in the Columbus Evening Republic that caught my attention. It concerned a farm house in Decatur County which had produced over 6000 points scored by high school basketball players over a span of just over 30 years.

As a bit of background, Gene and his brothers, Steve and Shelley, grew up on a farm on County Road 600 South and all three played basketball for the Jackson Township Tigers. The other schools in the part of the county south of Greensburg were the Burney Panthers and the Sand Creek Indians, formed by the merger of the Letts Bearcats and the Westport Warriors in 1940. These three schools would unite to form the South Decatur Cougars in 1968.

If you enjoyed this article and would like to read more about the history of high school basketball in Indiana, click here to subscribe to the Indiana Basketball History magazine.