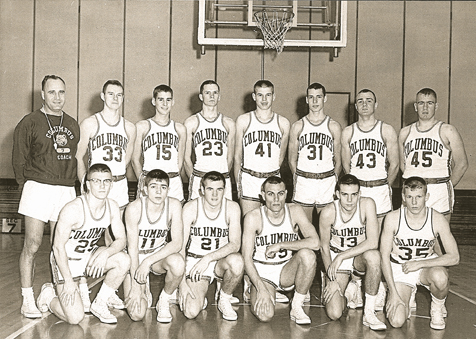 The  1961-1962 season would end in disappointment for Bill Stearman and the Columbus Bull Dogs with a loss to Brown County in the sectionals.  Coach Stearman at one point even considered retiring but Columbus principal Jud Erne refused to accept the  coach-s resignation. Thus Bill and JV coach Don McDonald began the 1962-1963 season with a renewed passion. The coaches changed offense to a new -Triple Post- and changed defense to a full court man to man press and would fall back into a 1-3-1 half court trap that Coach called SPIDER.   The end result would be the first undefeated season and number #1 ranked team in school history.  Coach Stearman said this was his greatest team in 40 plus seasons he coached.

If you enjoyed this article and would like to read more about the history of high school basketball in Indiana, click here to subscribe to the Indiana Basketball History magazine for only $20.00 a year for the quarterly publication.