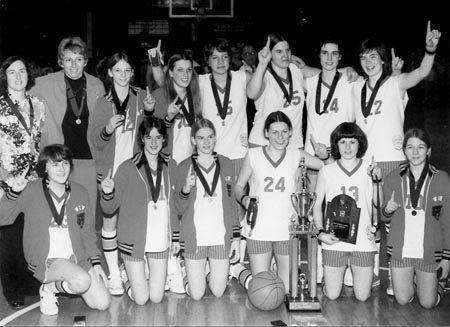 The Warsaw ‘Tigers’ will forever be the first IHSAA State Girls’ Basketball Tournament champions. And, they did it with an undefeated season. Two undefeated teams played in the championship game at Historic Hinkle Fieldhouse, and Warsaw took the trophy home as the 1976 State Champions by defeating previously unbeaten Bloomfield 57-52.

There were outstanding individuals on each of the final four teams. Warsaw’s sophomore sensation Chanda Kline totaled 45 points in the two final games to lead all scorers. But it was Warsaw’s little Judi Warren who stole the show. The spirted leader of the ‘Tigers’ dribbled, passed, and shot her way into the hearts of everyone. She was the smallest player in the final four, but she more than earned the respect of her teammates and opponents as well as making the All-State Team, capped by being selected recipient of the coveted Mental Attitude Award.