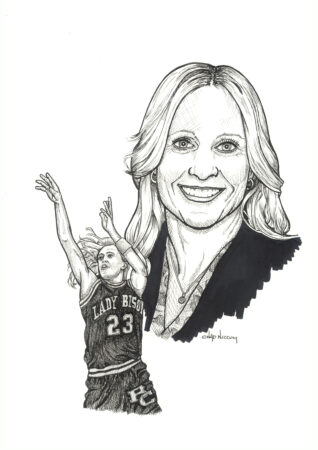 Totaled 1,113 career points at Benton Central, setting school records for career assists (506), single-season assists, career steals (418) and single-season steals…  averaging 21.6 points, 5.0 assists, 4.5 steals and 3.4 rebounds as a senior for 16-4 team, she was 1st team all-state, an Indiana All-Star and academic all-state…  career at the University of Arkansas included 1,459 career points, along with 507 assists, 239 steals, and a .837 career free throw percentage…  led the nation in 1994-95 with a .899 free throw percentage, was the 1995 SEC Freshman of the Year, three-time SEC all-conference, four-time honorable mention AP All-American and three-time SEC Academic Honor Roll honoree…  participated in 1997 World University Games, led Arkansas to the 1998 NCAA Final Four and was the 17th pick in the 1998 WNBA Draft to the Charlotte Sting…  played two seasons in the WNBA before a coaching career that has included roles at Indiana high schools and throughout the country at colleges including Purdue and Arkansas.