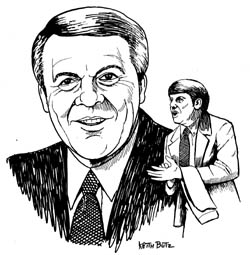 A standout athlete at Washington H.S. where he earned 14 varsity letters . . . carried on the tradition at Franklin College where he earned another 10 letters in basketball, baseball, cross country, and tennis . . . averaged 21 points per game as a senior, while leading the nation in free throw shooting and earning Little All-American Honors . . . Coached at Monroe City, South Knox, Martinsville and New Castle High Schools . . . had 452 wins and only 245 losses which included 17 sectionals, 6 regionals and one semi-state title . . . more than 50 of his prep players went on to play basketball on the collegiate level . . . he coached both of his sons, Steve and Sean, while at New Castle . . . Steve was named Mr. Basketball and went on to a standout career . . . following a 20 year stint at New Castle HS and a 300-188 record, he joined Steve’s staff at Southwest Missouri State University for four seasons . . . later accompanied Steve to the University of Iowa, retired in 2007.