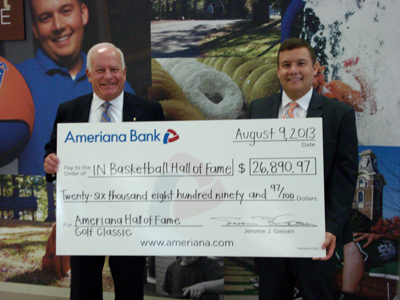 Ameriana President and CEO Jerry Gassen (left) presents
Indiana Basketball Hall of Fame Executive Director
Chris May a check for the proceeds of the 2013 Ameriana Hall of Fame Golf Classic.

Nearly 30 Hall of Fame inductees were among the field and the dinner speaker was Indiana University and Big Ten Conference all-time leading scorer Calbert Cheaney.

Other teams or individuals represented past or present players and coaches from Indiana University, Purdue University, the University of Notre Dame, Butler University, IUPUI, Marian University, DePauw University, and Wabash College, among other organizations.

With Ameriana Bank-s continuous sponsorship, the outing has raised over $496,000 for the Indiana Basketball Hall of Fame.  Proceeds are used to fund operation of the 14,000 square foot museum in New Castle.

The Indiana Basketball Hall of Fame is in its 52nd year of existence and has been based from their current facility in New Castle since June 1990.

Title sponsor Ameriana Bank is a community bank which began operations in New Castle, Indiana in 1890. Ameriana has grown and while they offer a full range of banking products, they are still, at heart, a community bank. Ameriana has 12 convenient banking center locations throughout Central Indiana, including Avon, Fishers, West Carmel and Westfield.