Indiana Basketball Hall of Fame inductee and legend Steve Alford will make an appearance at the Hall of Fame museum in New Castle on Monday, May 26.  Alford will take part in a meet and greet session from 11:30 am – 1:00 pm that day with free admission offered. 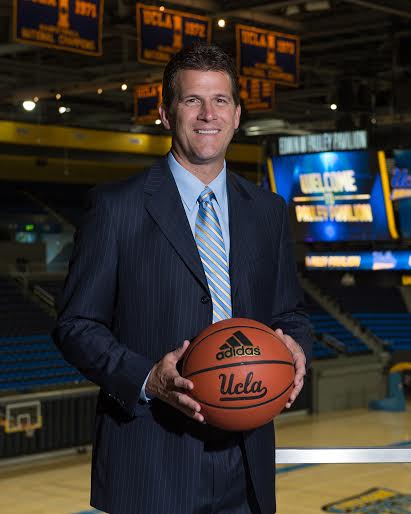 Alford, the 1983 Indiana Mr. Basketball, 1984 Olympic Gold Medalist and 1987 NCAA National Champion, will serve as honorary grand marshall of the 2014 New Castle Memorial Day parade at 10:00 that morning prior to his Hall of Fame appearance.

Autographs and photo ops will be limited to one per person.  Fans may bring their own memorabilia or photo cards will be available at the Hall of Fame.

Although Alford’s appearance will be limited to 11:30 – 1:00, the Indiana Basketball Hall of Fame museum will be open from 11:00 am to 5:30 pm that day in conjunction with the New Castle Memorial Day Festival at nearby Baker Park.

Alford, a 2009 Indiana Basketball Hall of Fame inductee, has completed his first season as head coach at UCLA, where the Bruins finished 28-9, won the Pac-12 Tournament championship and made an appearance in the NCAA Tournament’s Sweet 16.   The campaign tied the school record for most wins by a coach in his first season with the Bruins.

Over 23 seasons as a head coach at Manchester, Southwest Missouri State, Iowa, New Mexico and UCLA, his teams have won 491 games, making him the winningest college coach under the age of 50.